For fans of Leah on the Offbeat and Laura Dean Keeps Breaking Up with Me, Anna Birch’s I Kissed Alice is a romantic comedy about enemies, lovers, and everything in between.

Rhodes and Iliana couldn’t be more different, but that’s not why they hate each other.

Rhodes, a gifted artist, has always excelled at Alabama’s Conservatory of the Arts (until she’s hit with a secret bout of creator’s block), while Iliana, a transfer student, tries to outshine everyone with her intense, competitive work ethic. Since only one of them can get the coveted Capstone scholarship, the competition between them is fierce.

They both escape the pressure on a fanfic site where they are unknowingly collaborating on a webcomic. And despite being worst enemies in real life, their anonymous online identities I-Kissed-Alice and Curious-in-Cheshire are starting to like each other… a lot. When the truth comes out, will they destroy each other’s future?

It was the end of our junior year when everything between Rhodes and me came to be as it is now.

It was May, and we were at a pop-up installation on the edge of campus. Clouds of heavy, weed-scented smoke hung up around the light fixtures of an old gas station with bars on the windows, and rain was falling in through a spot where the roof had caved, leaving puddles on the dirty tiled floor.

Behind each ancient cooler door was an installation: women with tape over their mouths. Women with their hands bound. Women dressed like schoolgirls, and dressed like moms, and dressed like frumpy old ladies with curlers in their hair. There was a gas station attendant behind the dilapidated old counter, a girl barely older than us with shiny red lip gloss and breasts begging to escape from a Play- boy Bunny costume. Word around campus was that participants had to be eighteen so they could sign the liability waiver provided by the lead artist.

Men wandered from one cooler to the next, shopping quietly, selecting someone to take with them along with six-packs of beer and packs of beef jerky.

Rhodes and I had become friends, sort of.

But Sarah had been my best friend since the third grade, and Sar- ah and Rhodes had become completely symbiotic during their first and second years as roommates at the Conservatory. It had taken weeks of begging for Sarah to even suggest to Rhodes that I come along—no matter what I did, Rhodes thought my work was “pedestrian.”

She didn’t think I’d understand the show—called Quickies at the Kwickee Mart, clever them—or that the art installation would speak to me the way it spoke to her and Sarah.

But by some force of nature, I had been the one to win a scholar- ship at the Savannah College of Art and Design only a week before. My art wasn’t an existential crisis played out with paint and canvas, and it didn’t make any grand political statements, but it was going to pay for my college—and apparently it meant I was allowed to play with the big girls now. Only two days later, Rhodes invited me along herself.

A week after that, we stood side by side, stoned out of our minds and attempting to make sense of the little theater that played out in front of us. Some of the girls in the cases were seniors at the Conservatory, and I knew about half of the people standing around us from campus as well. The rest were unimaginably sophisticated, worldly looking artist types—people with ink-stained hands and tattoos that crept up from under the collars of their shirts and onto their necks.

Her brows were knit together; her cogs were turning.

She didn’t understand. I didn’t want to tell her otherwise, to ruin the night like I always do. It wasn’t enough to say it was about “like, feminism.” Anything can be about feminism, because in everything there’s an imbalance of power. There will always be one person in the room that has more privilege than the rest, and that person is almost always an Ingram.

It didn’t surprise me that Rhodes didn’t understand then, and it doesn’t now—she doesn’t really know what it means to be a little further down the food chain than everyone else. I’m not much further down than she is—I’m just as white, Christian-adjacent, abled, and straight-passing as she is—but I’m aware of it.

“Yeah, just, you know—” Sarah’s pupils were blown out. She held on to me for dear life, the way Rhodes’s barely-younger brother and then-dance-track student, Griffin, clung to Rhodes’s arm. Sarah liked Griffin then—she was infatuated, really. I think she thought he’d be an easy segue into being a fixture in Rhodes’s life forever.

The motherfucking patriarchy. As if that phrase in and of itself wasn’t the purpose of the installation, the fact that women are continuously victims of sexual violence in Western culture, so much so that it has permeated our patterns of speaking and even the way we curse.

This is art, they communicated, with stoops in their shoulders and ennui-burdened frowns. This is life.

Pot only ever makes me more philosophical. Everyone around me was melting into puddles, and I was practically writing ninety-nine theses on third-wave feminism on the back of a fifteen-year-old Kwickee Mart napkin that had been stuck to the bottom of my boot. 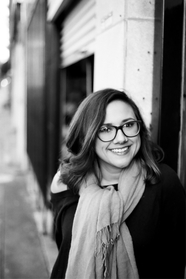 Anna Birch is the author of I Kissed Alice. She was born ‘n’ raised in a rural area on the outskirts of Birmingham, Alabama. She traded thick forests and dirt roads for the heart of the city, where she lives now with her husband, three children, and dog. She loves knitting, brie, and hanging out with her family.